The Thrilling Adventures of Lovelace and Babbage 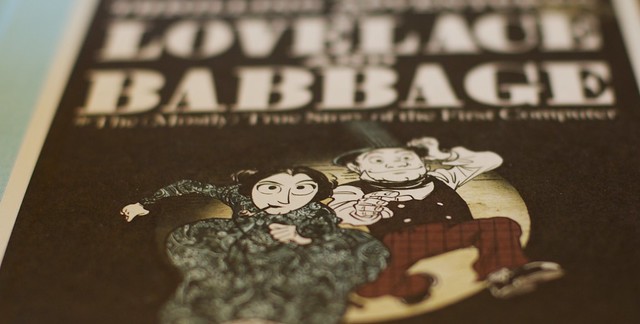 I have a weakness for Victorians, footnotes full of fascinating facts, a particular style of drawing, geeky in-jokes, and mathematical genius. When I first came across Ada Lovelace -- the Origin I was smitten. And so I have remained. 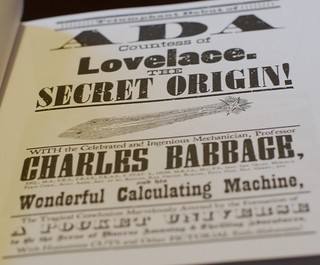 The opening story of the book;
an early version available here.
It is the perfect marriage of science and literature, academic irreverence, odd asides, style, verve, panache, erudition and cats.

Ideally I would just show you page after page of the comic, say "isn't it wonderful" and then send you off with one of my copies and don't come back until you've read it (this is generally my strategy offline), but I suspect I might get in trouble if I were to simply reproduce the entire book here. And so I am left trying to spell it all out in words.1

Ada, Countess of Lovelace, creator of the first computer program and originator of the idea that you can use an analytical engine for something other than numbers, mathematical daughter of Lord Byron, eccentric gambler, and generally cool cookie, makes a stellar protagonist. If she has somehow escaped your notice, you are not alone, but you should still remedy that immediately. Charles Babbage, inventor of the Difference Engine and the Analytical Engine (but not quite builder of either), enemy of street music, friend of all the cool Victorians and yet somehow still weirdly socially tone deaf when sciencing, likewise. I will confess, however, that while my love for Lovelace is all aspiration (so cool, so very cool), my appreciation of Babbage, who kept improving and tinkering rather than finishing any of his projects (while cursing people who played music in public places while he was trying to think) is one of deep, deep understanding.

The beauty of Sydney Padua's The Thrilling Adventures of Lovelace and Babbage is that it is so profoundly accurate while presenting a steampunkish pocket universe in which the Analytical Engine is constructed, Lovelace does not die prematurely, the Duke of Wellington is Prime Minister and never leaves his horse, and ebooks (let's face it) are actually to blame for the loss of Carlyle's first version of The French Revolution.

While its chronology goes a bit wobbly (all perfectly scientifically explained in the section on pocket universes, of course) and Padua wisely eschews 1830s fashion choices in the name of aesthetic taste, the Victorian period is no bland backdrop full of tired clichés. It is the geek's miscellany, featuring double and triple layer jokes wrapped in obscure fact and tied up with a computational pun or three (The Chinese Room, for example, being an actual room in the Difference Engine, decorated in the chinoiserie style -- with George Eliot observing it has just gone out of fashion). 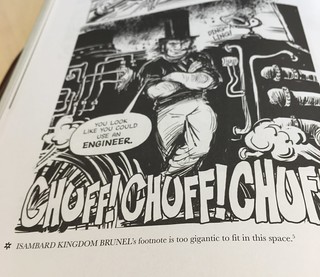 Ding-a ling: Brunel, whose fascination with the
extraordinarily large is a running gag in the comic.
Just as Babbage's and Carlyle's mutual enmity comes together with the famous fate of Carlyle's first draft (kindling) in the finale of the Client, Lovelace's war on poetry (limited to the fiction, but oh so well founded in the Origin) makes her the perfect suspect as the Person from Porlock who famously ruined Coleridge's buzz.

Now my enthusiasm for the period may make my mad giggling when faced with a room full of eminent Victorians a reaction particular to me, but I defy anyone to not appreciate Padua's rendition of the man who put "rakish" in "engineer", Isambard Kingdom Brunel. Or the Boolean jokes centered on the man himself. Or the use of Lewis Carroll in the discussion of maths and Lovelace's reputation. Or the moment when Luddite computers are attacking the engine. All right, I'll stop now. You get the idea.

You do not have to be a Victorianist to appreciate this comic, however. This is due in large part to the spectacular, extravagant, splendid annotations. There are not only footnotes, but endnotes annotating the footnotes, drawing out the wonderfully geeky references to obscure passages in letters or diaries, wrapping nearly every frame in a delightful gauze of context.

Now, I may be above average enthusiastic about footnotes, but I doubt anyone can disagree in this instance. They avoid the trap of becoming patronising, which could all too easily have been the case when an author is providing the foundation for her own play with historical fact;

they are generally sufficiently obscure to be fascinating, and even when making sure you do not miss a more obvious reference, the phrasing is so delightful I would not do without them.

Even better, there is not one, but TWO appendices! One presents some of the fruits of Padua's (presumable) hours of fun in the Google Books Archive, including Babbage as portrayed in Punch, anecdotes of various kinds and a letter discovered by her which once and for all punctures the preposterous proposition that Lovelace was not the Enchantress of Number. The other offers a diagram and in-depth discussion of the functioning of the Analytical Engine itself.

The art is the area in which I feel least qualified to give any comment beyond "I like it". 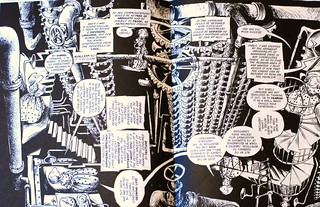 George Eliot, lost in the Difference Engine.
It is like a friendly Eisner, alternating between detail and suggestion at intervals, but with the most vivid characters. And I will say that I like how the the potential of the medium is at times so wonderfully exploited: The scene to the right is just one example of illustrations and text that happily ignore the left to right/top to bottom convention; at a later point, Queen Victoria sternly silences a particularly expansive footnote, while the final story, "Imaginary Quantities" features an extended discussion with footnotes in a display of the historical construction of Lovelace herself.

And then there are the puns. Some visual (Lady Lovelace re-booting the machine by kicking it), some mathematical (Lovelace landing in a "complex" situation between real and imaginary numbers), some political (the "war on error"), others again the pun equivalent of allegories (one chapter is titled "Lovelace and Babbage vs. the Economic Model", and I won't go into the details of that except to point out that Brunel gets involved).

Finally, how can one not love a book which so hilariously references named historical women of science? There is Ada's mother Anne Isabella Milbanke (the Princess of Parallelograms, according to Lord Byron), Mary Sommerville, and Caroline Herschel. But Ada, enchanted math fairy of my heart, wins forever.

As I said, I love this book. I thought I'd tell you, now that it is coming out in paperback (not just good, but pretty, too). It seemed like the right time. 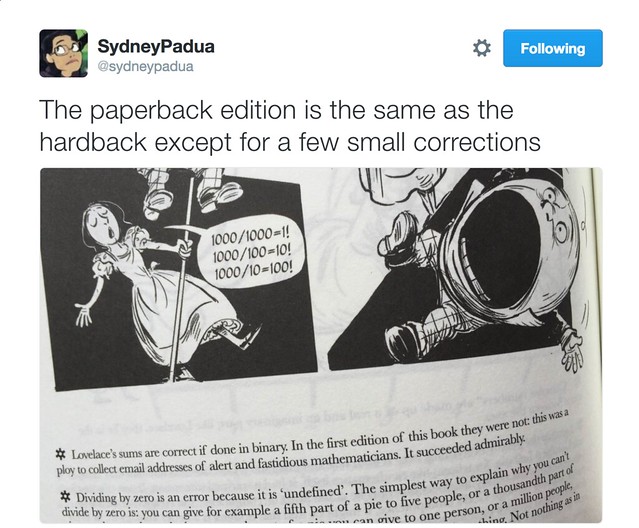 Considering the precedent set by Charles Babbage, I feel I can take the liberty of ending with a grumble:

Perfectly propitious illustration
hand animated by Sidney Padua on the
occasion of the launch of the paperback,
presumably illustrating how you should
hasten to buy it.

I hardly ever pre-order anything. If I do, it is because I am desperate to get a hold of it, and really cannot wait. So when I pre-ordered the hardcover of this book twice, you may guess at my impatience. The fairies of book sales, however, do not love me, and so the first copy was not sent until the day after the book came out; and the other never arrived at all (Blackwells sent me a "sorry, we seem to be sold out" e-mail, which is particularly annoying when you have pre-ordered as one would think that the whole point of pre-ordering is to avoid "sorry, we seem to be sold out" e-mails. Now, you might think "that was actually a lucky break, since you would then not be left with two copies, but as I in a fit of pique went online and ordered another copy immediately -- because the UK copy looked even prettier than the American -- that ... well. Anyway.

When I tell you I have also pre-ordered the paperback, you will perhaps appreciate how much you need this book.

And while you are out there taking my advice anyway, go support this LEGO concept in which there is not only a Lovelace and a Babbage, but an analytical engine with an inbuilt Raspberry Pi.


1If you doubt its splendour, you can always read what is available at 2dgoggles (though the book improves on that in several respects). I recommend the Miscellanea section, which ranges from speculations on Babbage and lizard people (with an amusing anecdote about a volcano), via process sketches to astute observations on fashion. And there is also the Organised Crime story (not in the published book), which makes me long for an animated musical. ↩
Category
Literature
Tags
recommended
literature
Books
comics
computing history
Ada Lovelace
Charles Babbage
Sydney Padua
Views
9060
Last edited by
Camilla, 24.08.16 13:16