Camilla, 12.12.14 07:05
Unlike Star Wars, which must never ever again be mentioned in the context of Christmas, ever, Star Trek remains comparatively unblemished. Memory Alpha lists the various appearances of the holiday in the series, and I note with unblemished joy the total absence of the words "Holiday Special", "Planet of the Wookies" or "weird, surrealist dance numbers". All as it should be. What Star Trek has produced, however, is a a short picture book about Khristmas. 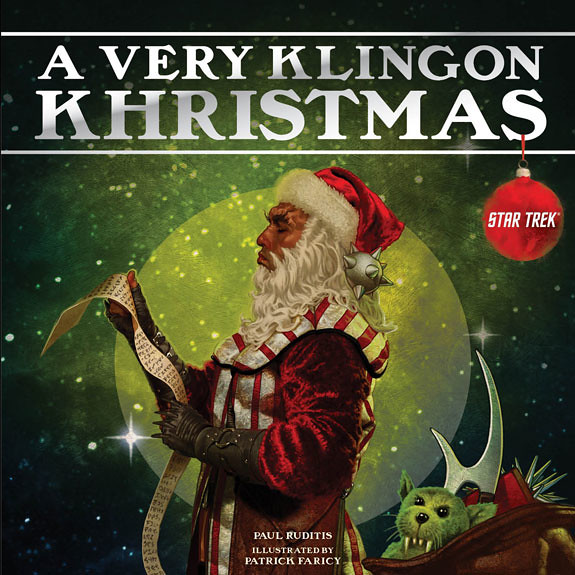 Link takes you to a gallery of the art and text of the book, leaving what I am about to write largely superfluous. I link to it in full confidence that you will not leave me for prettier pastures. May I also add that I would really quite like to own that evil-looking teddy, pretty please?
This is not the first Klingon/Christmas crossover (I direct your attention to A Klingon Christmas Carol), but today's text has thankfully been translated into English and is therefore more easily accessible to those of us who have made the wrong priorities growing up.

We are dealing with yet another poem; don't blame me: there is something about Christmas that seems to inspire the poetic spirit. This one is rather out of the ordinary, however; and I am not sure how to explain it to those of you who do not immediately get it. It begins,

'Tis only on Khristmas
We Klingons feel mirth --
the day of the warrior
Kahless's birth.

Kahless was the founder of the Klingon Empire, and functions as Messianic figure (or Arthurian, perhaps -- leaving when having fulfilled his purpose of bringing the laws of honour to the Klingon people), he leaves and promises to return, indicating a far-off star as the place he will be found:

This story is known
by us all, near and far,
of the leader who swore
to return on a star.
But the one day that Klingons
all hold the most dear
has been stolen by humans
just like our Shakespeare!

In Star Trek VI: The Undiscovered Country the Klingon Chancellor Gorkon stated that "You have not experienced Shakespeare until you have read him in the original Klingon", and people have of course followed that to its natural conclusion: The Klingon Shakespeare Restoration Project has, through much toil and trouble (I imagine) produced a Klingon edition of Hamlet. If you are terribly confused at this point, wondering what this Klingon thing is, I direct you to the Klingon Language Institute for your present edification.

The book, in cheery rhyme and rhythm, informs us that we have rather mangled the holiday in our pale imitation of it, and proceeds to describe the proper execution (sorry, that wasn't meant to be a pun -- I suspect it is the Klingon poetry rubbing off on me):

Then on Khristmas Eve night
we await Santa Qlas.
But our Kringle's equipped
with retractable claws.
He, too, makes a list
of who's naughty and nice.
But he doesn't waste time
with checking it twice.
...
He sees who is sleeping
and knows who's awake.
His scanners and sensors
aren't easy to shake.
...
He carries them all
in a warp-twenty sleigh,
led through the night
by eight tiny birds-of-prey
(and sometimes a ninth
that will help clear the way).

This is where the words alone will not do. The text is accompanied by a painting of a sleigh pulled through space by eight Klingon warships (birds-of-prey), headed by a ninth which shoots a bright red laser from its ... shall we say "nose"? The interweaving of Christmas and Star Trek patterns is clever enough to make me forgive the occasional halting rhyme. I must also confess this Klingon Santa fits much more with my instinctual unease when it comes to people who come down the chimney while you sleep

Neither barring the doors
nor the chimney will do.
Santa's transporter beams
him right through.

And then for the highlight of the book as far as I am concerned:

The kids then rush out
to see what he's brought
and learn if their fears
were all truly for naught.
For the honorless child
will find something shocking:
A troublesome tribble
awaits in the stocking.

Because the episode "Trouble with Tribbles" now makes perfect sense.

The poem keeps listing varieties of human Christmas activities with a Klingon twist. There are Battle Carols, scary snacks for Santa, and mulled blood wine. And after the brave Klinglets (because I have decided that that is what we are calling Klingon children) have found non-tribble gifts,

Just like Earth kids,
they have fun in the snow,
making snowgons and
weaponized snowballs to throw.

I suspect it won't take Silje long to follow their example and make Snowgons (and I will admit it took me an embarrasingly long time to parse that as snow-klingons) -- as soon as the weather stops being annoying and realises winter should be coming. Also, I am from now on going to describe all thrown snowballs as "weaponised". Moreover,

In each noble house
families start the feast
with the head of the house
carving up the roast beast ... er ... targ.

A reference you will all get after having read Monday's entry. But it is far surpassed in elegance (and sheer persuasive power) by the meditation on mistletoe:

The leaves twinkle green,
and the berries shine redly.
Only Klingons could love
a plant that's so deadly.

There is no more information on Kahless and the story of his birth. I find I would rather like to read an anthropological study of some kind, which connected the various customs of Klingon Khristmas to the myths and legends of the culture. Am I asking too much? I don't think I am. Meanwhile, Santa watches from above, until he is done watching, and

With a shout of "Qapla'!" his sleigh quickly departs.
Coordinates set on his private star charts.
And he's heard to exclaim in the night still and calm,
"Happy Khristmas to all, and to all a maj ram!"

Maj ram, if you did not guess, is Klingon for "good night"; making the last line echo the parting words of another Santa Claus. This is not the only English/Klingon code switching in the book. One page gives the lyrics of the traditional Klingon drinking song, which translates into English as roughly "And the blood was ankle deep./ And the River Skral ran crimson red./ On the day above all days. /When Kahless slew evil Molor dead." -- I assume we cannot be surprised if the Klingon association of the colour red with Khristmas springs from rivers of blood (though I thought Klingon blood was supposed to be pink).

Should you make your children read this? Yes, of course you should. They will need a good cultural foundation before getting to grips with A Klingon Christmas Carol and the Klingon Hamlet later in life.
Tor likes this

Neither barring the doors
nor the chimney will do.
Santa's transporter beams
him right through.

SANta's transPORTer
BEAMS him right THROUGH